skip to main | skip to sidebar

The following sayings are very common in many countries in Latin America. It will be helful to learn how to use to speak with the natives. They will be impressed!

Ojos que no ven, corazón que no siente: Out of sight, out of mind


http://www.123teachme.com/learn_spanish/sayings_dichos
Posted by Rob at 1:08 PM No comments:

How to make horchata (a rice drink)? 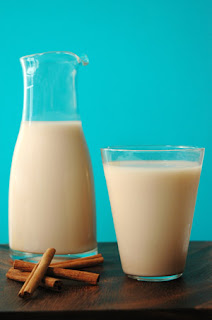 Horchata is a rice drink serve in many Latinamerican countries. It is delicious and refreshing.

Directions
Cover the rice and the cinnamon with water. The next day blend the rice, cinnamon, peanuts and water. Add sugar. Serve over ice.

What's the difference between the verb SER and ESTAR in Spanish?

http://www.123teachme.com/learn_spanish/verbs_ser_estar
Posted by Rob at 7:08 AM No comments:

What does it mean "echar a perder". In Spanish there are several idioms that use the verb ECHAR . "echar a perder" means to ruin; to spoil.
Posted by Rob at 7:46 AM No comments:

Does the verb SER indicate a permanent state?

The verb SER does indicate a permanet state. Example: I am Italian., I am a nurse. To learn more about this topic go to this link.
verbs ser and estar

Drain the tuna. Mixed tomatoe, onion, mint and lime juice. Add salt to taste and serve it with saltine crackers or nachos.

This is a delicious guatemalan recipe. It is easy to make and very refreshing in the warm weather.

Receta de: Mimi Cabrera
Posted by Rob at 7:39 AM No comments:

llegar a - to reach

llegar a ser - to become

llegar a saber - to find out

For the full conjugations of llegar, please visit:

The English word, must or the phrase to have to can be expressed two ways in Spanish.

Pablo tiene que levantarse una hora antes que nosotros para no llegar tarde a la oficina.
Pablo must get up an hour earlier than us so he does not arrive late at the office.

Here are some other example of various sentences with different conjugations of tener que.

Tengo que aprender lo mas que pueda..
I must learn as much as I can.

Tengo que preparle eso.
I must prepare that for him.

Tuve que llevar a mi hijo al hospital
I had to take my son to the hospital.

or one can use deber to express the same idea

Debo preparle eso.
I have to prepare that for him.

Debo llevar a mi hijo al hospital
I must take my son to the hospital.

Debo hacerlo.
I must do it.

Making some Spanish 'AR' verbs into nouns is easy!

A number of Spanish 'AR' verbs can be easily changed into nouns by doing the following:

Let's look at an example.

They are masculine words, hence we color code them blue. (We use redfor feminine words, and green for others like verbs etc.

votar becomes el voto, the vote, and the verb is voto - I vote, or I am voting.

cantar becomes el canto, the song, and the verb is canto - I sing, or I am singing.

progresar becomes el progreso, the progress, and the verb is progreso- I progress, or I am progressing.

dibujar becomes el dibujo, the drawing, and the verb is dibujo - I draw, or I am drawing.

odiar, to hate becomes el odio, the hate or the hatred, and the verb isodio - I hate, or I am hating.

And here are some more too...

robar, to rob, becomes el robo, the robbery, theft...
- and the verb is robo, I rob or steal, or I am robbing, stealing.

estudiar, to study, becomes el estudio, the study...
- and the verb is estudio which is I study, or I am studying.

insultar, to insult, becomes el insulto, the insult...
- and the verb is insulto, I insult, or I am insulting.

pesar, to weigh, becomes el peso, the weight...
- and the verb is peso, I weigh, or I am weighing.

refrescar, to refresh becomes el refresco, the refreshment...
- and the verb is refresco I refesh, or I am refreshing.

triunfar, to triumph becomes el triunfo, the triumph...
- and the verb is triunfo, I triumph, or I am triumphing.

archivar, to file, becomes el archivo, the file...
- and the verb is archivo, I file, or I am filing.

anunciar, to advertise, becomes el anuncio, the advertisement.
- and the verb is anuncio, I advertise, or I am advertising.

cepillar, I brush, becomes el cepillo, the brush...
- and the verb is cepillo which is I brush, or I am brushing.

divorciar, becomes el divorcio, the divorce.
- and the verb in Spanish is divorcio, I divorce, or I am divorcing.

fracasar, to fail, becomes el fracaso, the failure...
- and the verb is fracaso, I fail, or I am failing.

gritar, to shout, becomes el grito, the shout, or cheer...
- and the verb is grito, I shout, or I am shouting.

caminar, to walk, becomes el camino... the road or pathway or track...
- and the Spanish verb is camino, I walk, or I am walking.

cambiar, to change becomes el cambio, the change (and the money exchanger)...
- and the verb is cambio, I change, or I am changing.

abrazar, to hug, becomes el abrazo the hug or embrace...
- and the verb is abrazo, I hug, or I am hugging.

arreglar, to arrange in Spanish, becomes el arreglo, the arrangement...
- and the verb is arreglo, I arrange, or I am arranging.

saludar, to greet, becomes el saludo.
- and the verb is saludo, I greet, or I am greeting.

With the pronunciation - for the infinitive, stress the last syllable.

For the verb and the noun, the stress is on the next to last syllable.

These examples are taken and adapted from the marvellous book first published in 1951 by Margaret Madrigal called 'Madrigal's Magic Key to Spanish, A Creative and Proven Approach' published by Broadway Books, New York and available from all major booksellers online including Amazon, Barnes and Noble, etc.

The Spanish word, Ven can mean either come or see.

The Spanish word for "come!" when addressing a friend, relative, child or subordinate is Ven!

Ven also means see, as in ellos ven, which is Spanish for they see.

Remember this useful word Ven. Which can mean "come!" or "they see".
Posted by Rob at 3:05 PM No comments:

¿Cuándo cumples años? = When's your birthday?
lit: When do you reach (your) years? (inf.sing)

From the verb:
cumplir = to carry out; to obey (law); to honour; to keep (a promise), to peform; to serve (e.g. prison sentence, military)

Hoy cumplimos diez años de casados.
= Today we are (have been) married for ten years.
lit. Today, we are reaching ten years of marriage.

cumplirse (reflexive) = to be realized, to be fulfilled, to come true.

Why not! Of course! Sure!

In Spain, this expression is not used. One would say:

Some other ways of saying "Of course!":

The Origin of Borracho

In many rural regions of Spain, wine is still served in leather bota bags which in the 15th century were called borrachas, in Catalan.

Borracha comes from botella (bottle) y morratxa (a type of laboratory bottle). Later, the Spanish word borracho was used to talk about a drunkard, someone who was lleno de vino (full of wine).